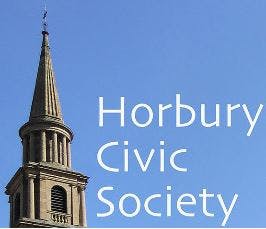 Horbury Civic Society
working to make Horbury a better place in which to live and work.
Horbury Civic Society was established in 1968 and is a registered charity (registration number 255238).In 2015, it was decided to re-launch the Society. A new committee was elected and all the previous committee members stood down. The new committee is now working hard to attract new members. We particularly want to recruit some new people from the Horbury area to help us run the Society by agreeing to join the committee.