Historically there are many good reasons to visit Horbury, all of them are good and some of them you may even find a little surprising. 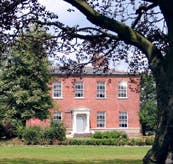 Recorded in the Domesday survey as “Orberie.” Horbury’s fascinating architectural features include a number of notable medieval and Georgian buildings interspersed with an interesting mixture of Victorian properties.

When the Victorian House of Mercy opened in 1858 it was the first religious community to be founded in the north of England since the Reformation. Its purpose was to rescue fallen women from sin and destruction. As the huge complex developed it embraced a convent, chapel, hospital and retreat for the clergy. Subsequently re-named St Peter’s Convent it opened a private preparatory school dedicated to St. Hilda in 1949 and still flourishes today.

Famous sons connected with the township include: John Carr (1723-1807), the renowned Georgian architect and a former Lord Mayor of York who was born in the town and funded the church of St Peter & St Leonard. This also serves as his mausoleum which may be visited on special occasions.

The contemporary novelist Stan Barstow, who wrote “A Kind of Loving,” was born in Horbury and his novel “Joby” was filmed in the town. A famous Victorian “visitor” was Reverend Sabine Baring-Gould (1834-1924) who married a local girl and wrote the words of the famous hymn, “Onward Christian Soldiers.” Other names associated with music include David Turton (1768-1846) and William Baines (1899-1922).

Horbury is a small town with a difference. We hope you will visit and enjoy its many treasures.

To find out even more about Horbury, download our leaflet. The leaflet includes a town centre trail and a further circular walk that follows snickets and alleys, canal paths and bridges and ends with a walk in the park. Events and leisure activities are also covered with lovely photographs illustrating what Horbury has to offer.